We are thrilled to welcome Ralph Schmidts (Career Level 7, from Germany) to our Lyconet Presidents Team! Ralph was born and raised close to Lake Constance in Tuttlingen, and later on he finished his Infrastructure Management Studies in Stuttgart. Shortly after, he decided to pursue a career in sports. He was very successful as a dancer, which made it clear to him that he is not made for working from 9 to 5 every day, and this encouraged his dream of being independent. He started consulting private business customers, which allowed him to stay focused on sports.

But one day, as he can recall, his path crossed Lyconet and myWorld. Three months after that encounter, he realized the full potential of what the world of Lyconet and myWorld has to offer. Ralph clearly remembers that day because it was about to change his life. In 2020, he decided to dedicate himself fully to the business and to start his Career as a Marketer from zero. Despite having to handle some challenges on the way, he never gave up – a decision he is highly proud of.

Ralph has a very interesting view of success. For him being successful means being a man of value and inspiration. According to him, we should be open to the idea that perfection doesn’t exist, but that we should rather learn and constantly grow. Only when we do better and improve, can we call ourselves successful.

Ralph has some tips to share with the Marketers that are eager to follow in his footsteps. For him being willing to do something different, something no one else is doing is worth trying! Also, the right coaching and the right surrounding can be crucial. Having a mentor who at the same time is your inspiration can certainly influence your Career choices. The same applies to the circle of people around you and the Team. Regarding taking pieces of advice, Ralph says: “Do not take advice from people who live a life you don’t want to live.”

What keeps the young Lyconet President motivated is his concept of freedom and independence, which is quite intriguing. He states: “It is not that I can do whatever I want, it is that I don’t have to do what I don’t want to … that is freedom!”

For Ralph, his favorite part of being a Lyconet Marketer is being able to celebrate the success of his Team and help others. With Lyconet, he can connect with people from all over the world, meet them and share experiences with them. That is the pleasant aspect of the business.

As other Lyconet Presidents have stated before, one of the greatest challenges when starting as a Marketer is the understanding and the support of the family and friends. Ralph shares that his family was concerned that he was not following the standard 9 to 5 business model, but he managed to prove them wrong. He knew what he wanted and that it is okay to be different and wish for something different. Every time he had doubts, he used to ask himself “What’s the alternative?”, and he was never able to see any other future than the one with Lyconet.

“First, I implemented Lyconet in my life, nowadays it is my life!” 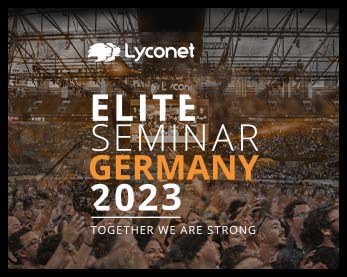 Previous articleGoal setting – How you can turn your life around
Next articleWork smarter, not harder!

Selfless and determined – the success story of Mario Oreggia

Find the perfect balance with ONESENSE